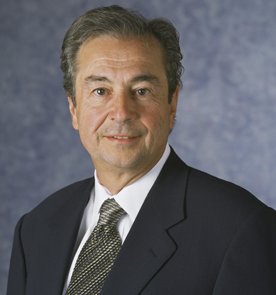 At the dedication of he Tribute to Children Monument in 2009, Michael Strueber of the Colcom Foundation noted the significance of the site. “It was Astorino’s idea to place ‘Pittsburgh’s Tribute to Children’ in its present location. The visionary sighting of this sculpture is nothing less than brilliant,” he said. “Astorino opened and recycled the Manchester Bridge Pier. They chose to cantilever the statue’s base adjacent to the confluence of rivers facing our historic point and the city of Pittsburgh. Against the backdrop of Heinz Stadium, their design was daring, difficult and ultimately dazzling.”

Among his many notable projects, Louis Astorino has served as architect of record on the award-winning PNC Park baseball stadium for the Pittsburgh Pirates;

the much honored PNC Firstside Center; the Trimont condominium high-rise overlooking downtown Pittsburgh; and has been one of the restoration architects at Frank Lloyd Wright's Fallingwater in Mill Run, Pa.

He was the first and only American architect to do a building in the Vatican. That building, the Chapel of the Holy Spirit, is where the sequestered Cardinals attended mass before voting on the new pope. The chapel adjoins another project Astorino consulted on: the Domus Sanctae Marthae, which houses visiting cardinals and bishops.

Astorino completed a new Transplant Center for the University of Pittsburgh Medical Center (UPMC) in Palermo, Italy, and the new Children's Hospital of Pittsburgh.
Home
Background
A Gift in Remembrance From a Friend
Carved Inside a Pier
Sculptor Robert Berks
Architect Louis Astorino
Visiting the Site
Directions
Hear the Music of Mister Rogers at the Site
New Benches
Did You Know?
Photos & Videos
Meet Our Neighbors
Mr. Rogers Statue returns to North Shore
(Feb. 2018)
Mr. Rogers Statue Gets A Cleaning
(July 2014)
Construction
Putting the Statue in Place and the Unveiling
Mr. McFeely and city High School students sing
on an October evening at the site
A quiet sunset in December
New Benches
Share Your Photos
Fred Rogers on Childhood