Carved Inside a Pier

The location of the statue was the brainchild of architect Lou Astorino, who noticed the old pier one day looking down from Mount Washington. The riverfront spot reminded him of Mister Rogers both because he was an avid swimmer and because of the skyline view of the city that he loved.

When Mrs. Rogers heard the idea for a statue of her notoriously modest husband, "My first thought was, 'Oh, Fred would be horrified,' " she said. "But the way in which it's been done, part of a site [that is] a tribute to children, would have been all the difference. It's not all about him, it's about the children." 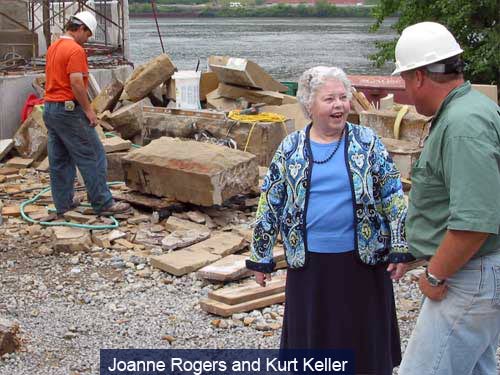 Mrs. Rogers envisions children crawling on the lap of the bronze statue, which depicts Mr. Rogers sitting down and tying his sneakers, as he did at the beginning of each episode of "Mister Rogers' Neighborhood."

"It's the only pose my husband would consider," said Mrs. Berks, the sculptor's wife. "It's the pose that everyone identifies with him."

"I can't think of a better symbol to promote Pittsburgh to the world than Fred Rogers," said Allegheny County Executive Dan Onorato.

He complimented Mr. Astorino's vision in taking "an eyesore off of this waterfront and turning it into an asset," referring to the blackened pier that had been useless since the opening of the Fort Duquesne Bridge in 1970.

Mrs. May ensured that the site would not be funded with taxpayer dollars. The Colcom Foundation, which she founded, has permanently endowed maintenance costs for the site. It is a gift from the Colcom Foundation to Family Communications, Inc., which then gave it to the city of Pittsburgh and Allegheny County.

Mrs. Rogers said that both her husband and Mrs. May "would be happy for us to have this place, which will be a place of remembrance."


- Resource: The Pittsburgh Post-Gazette
Home
Background
A Gift in Remembrance From a Friend
Carved Inside a Pier
Sculptor Robert Berks
Architect Louis Astorino
Visiting the Site
Directions
Hear the Music of Mister Rogers at the Site
New Benches
Did You Know?
Photos & Videos
Meet Our Neighbors
Mr. Rogers Statue returns to North Shore
(Feb. 2018)
Mr. Rogers Statue Gets A Cleaning
(July 2014)
Construction
Putting the Statue in Place and the Unveiling
Mr. McFeely and city High School students sing
on an October evening at the site
A quiet sunset in December
New Benches
Share Your Photos
Fred Rogers on Childhood